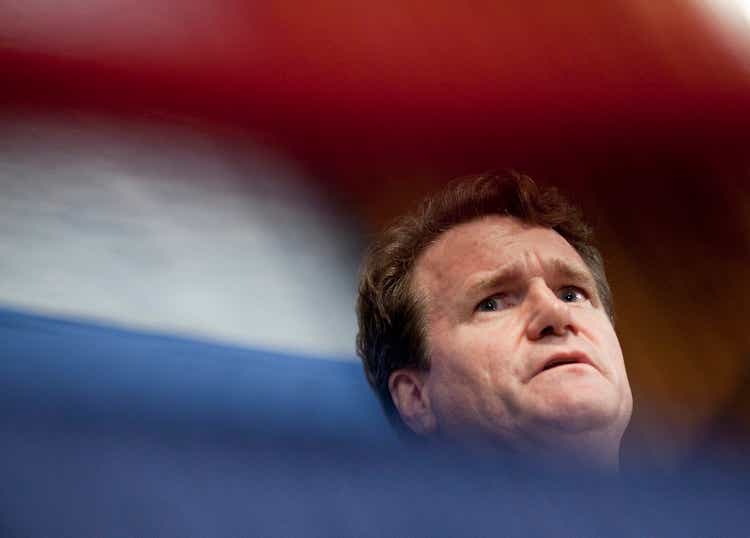 Banking is a downside protection game. It looks like Brian Moynihan has some catching up to do, but his bank is gaining in efficiency as more consumers gravitate to its online platforms. The formula is simple: buy back stock, reduce costs and benefit from a resilient American consumer. This should lead shareholders to long-term returns of 10% per year and beat the S&P 500.

Discussion with the CEO and stress tests

We have noticed a strange phenomenon on Wall Street. Analysts listen closely to quarterly earnings calls, and small remarks from CEOs often swing market capitalizations by tens of billions. For example, Jamie Dimon and his CFO discussed the possibility of an economic hurricane, as well as a Paul Volcker-style recession, sending shares of JPMorgan Chase (JPM) plummeting. Meanwhile, in our view, Brian Moynihan pretended all good and dandy during the results calls. Moynihan is a constant cheerleader for BAC stocks, the American consumer and the CNBC crowd. At the same time, he appears to be dodging questions about what could go wrong and Bank of America’s poor performance in the Fed stress test. Reuters reported:

“Shares of America’s biggest banks rallied on Friday after passing the Federal Reserve’s annual health check, but Bank of America (NYSE: BAC) has underperformed, with test results implying that it needs a larger capital cushion than expected, which could limit share buybacks and dividends.”

It appears that Bank of America is lagging behind in building loan loss provisions and capital reserves compared to its peers. This could cause BAC’s earnings to underperform in the coming quarters.

Warren Buffett has often said he prefers honest management, but his two most important positions are led by Tim Cook at Apple (AAPL) and Brain Moynihan at Bank of America. In our view, these CEOs consistently defend their actions.

“The bank’s customers logged into its digital platforms a record 10.5 billion times in 2021, a 15% year-over-year increase.

It is important to note here that Bank of America has more exposure to investment banking than many realize. Global Wealth Management and Global Markets accounted for 25% of the company’s net income in 2021. The company bought Merrill Lynch for $50 billion in 2008.

Bank of America’s largest segment, Consumer Banking, provides bank accounts, debit cards, credit cards, mortgages and other loans to US consumers and small businesses. We believe the US consumer is financially resilient, especially compared to consumers around the world struggling with high levels of household debt. Debt payments relative to income are still hovering around historic lows in the US:

Household debt to GDP has also fallen significantly since the global financial crisis:

We stick to our 2032 price target that we described in our article: Bank of America: A Buy in the Bear Market. The stock has risen almost 8% since then. Our price target for 2032 was and still is $73 per share, implying returns of 10% per year with dividends reinvested.

At 1.1 times book value, there is no way to consider selling Bank of America. It is not impossible for the company to trade at 2x pound in 5-10 years as it did in the early 2000s:

Stanley Druckenmiller warns of a recession and further stock market declines in 2023. Given strong asset price increases in 2020 and 2021, this should be expected. Unemployment tends to reach extremely low levels just before skyrocketing. This will test the strength of BAC’s assets and, as we have said before, Bank of America should build more provisions for loan losses. Although this may lead to lower earnings in the short term, we encourage investors to focus on normalized earnings.

Over the long term, Bank of America depends on the evolution of interest rates. We believe that interest rates will settle around 5%, which would benefit the bank. But if they fall back to zero or rise too high, it could negatively affect the blood alcohol level. High interest rates hurt demand and low interest rates create stagnation in debt as we have seen in Europe and Japan.

Bank of America is a great investment, with strong prospects of beating the S&P 500 in the decade ahead, but it’s time to prepare for the worst. As consumers turn to online banking, BAC is leading the industry and cutting costs. The company has a simple and effective formula for increasing EPS and should benefit from multiple expansion as the market realizes the sustainable nature of its business. At the same time, the company is more exposed to investment banking than people realize. As a recession looms, BAC needs to build capital. We wouldn’t even consider selling at 1.1x the pound and having a “buy” rating on the stock.

Dave Ramsey says that taking on this type of debt is “like trying to save yourself from a sinking boat with a bucket full of holes”. Is he right ?