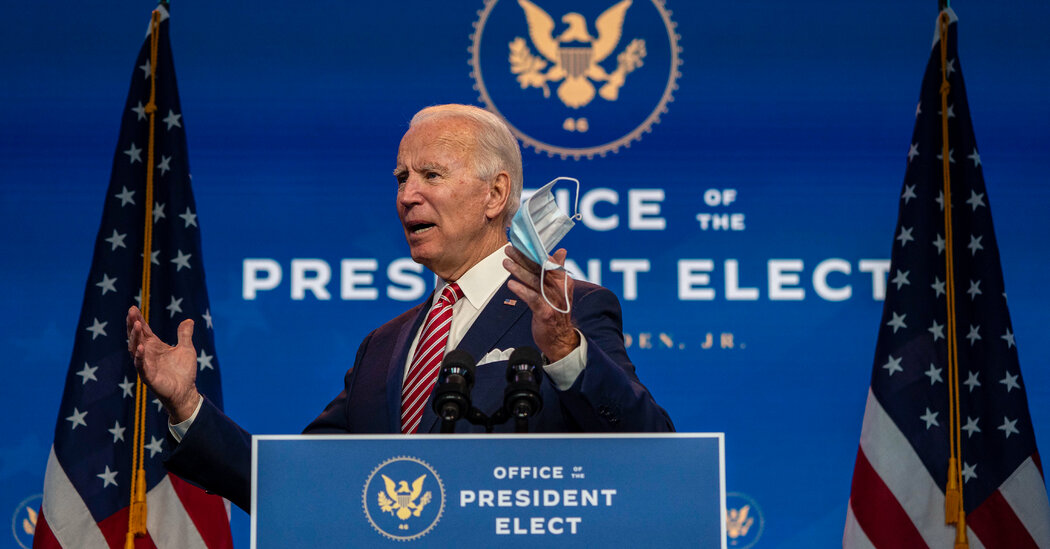 WASHINGTON – President-elect Joseph R. Biden Jr. warned Monday of a “very dark winter” ahead and called on Congress to pass a big stimulus package immediately to help workers, businesses and state and local governments struggling to cope with the coronavirus pandemic.

Mr. Biden gave his first major political speech since he won the election after participating in a virtual meeting with business and union leaders, including CEOs of General Motors, Microsoft, Target and the Gap and the leader of the United Auto Workers. The group, gathered on Zoom, discussed how to safely reopen the U.S. economy when virus cases continue to rise across the country, causing further lockdowns.

The president-elect’s decision to mark his meeting with workgroups and businesses highlight the immense challenge facing his administration, which will face a spike in coronavirus infections and deaths, a faltering economic recovery and a public weary of restrictions on daily living.

Many companies continue to struggle against reduced activity and are eager to bring workers – and customers back – while unions continue to insist that companies do not put workers at unnecessary risk.

Participants said the discussion, which was closed to journalists, focused heavily on how to keep companies running and on workplace safety, including pressure from union leaders for better protection of workers through the Federal Administration for Occupational Safety and Health.

“The majority of discussions with GM have focused on Covid protocols and the importance of keeping manufacturing running,” said a GM official familiar with the discussion. “There is a lot of interest in how we work with the UAW to keep the workforce safe and keep the factories running. “

Rory Gamble, the president of the auto workers union, said in an interview that he urged Mr. Biden to ensure that OSHA publishes “strict binding standards” to keep workers safe during the pandemic. Under the Trump administration, OSHA refused to issue specific regulations related to coronaviruses, opting instead to recommendations, and largely avoided inspecting facilities outside of a few high-risk industries like healthcare and emergency response.

Mr Biden sought to project unity within the group, saying: ‘We all agree that we want to get the economy back on track, we need our workers to get back to work by getting the virus under control. . ” But the United States “is entering a very dark winter,” he said. “Things are going to get a lot harder before they get easier. “

To help businesses and workers get out of this, Biden said, Congress needs to pass another round of stimulus quickly, but he offered no indication of what kind of political compromise could help. break out of a partisan stalemate in Washington over a new round of economic crises. assistance. Rather, he reaffirmed his support for a $ 3.4 trillion plan that House Democrats approved in May and which Senate Republicans rejected for months.

Mr Biden said he hoped a dozen or more Republican senators would join Democrats in passing the type of broad package they approved in the spring. This assistance included $ 1,200 checks to low- and middle-income Americans, new loans for hard-hit small businesses, help from state and local governments, and expanded federal testing and tracing programs.

As Mr Biden warned of economic darkness, financial markets rallied on Monday after the moderna drug manufacturer announced that its coronavirus vaccine was 94.5% effective, fueling hopes that the deployment of a highly effective vaccine could hasten the end of the pandemic and its economic damage.

The disconnection highlights the dangers for the economy in the months to come. Growing optimism for a vaccine could breed complacency among lawmakers when it comes to supporting the recovery, which is already stalling and could be further hampered as critical spending programs expire in the end. of the year. It could also encourage individuals to ignore warnings from health officials about activities that increase the risk of contracting the virus before a vaccine can be widely deployed.

States and cities have already started to impose new restrictions on economic activity in an attempt to curb the spread. Chicago announced a new “stay at home” Order Monday and advised residents to avoid travel, remove guests from their homes and cancel Thanksgiving celebrations. California Governor Gavin Newsom said Monday he was pulling an “emergency brake” to stop plans to reopen the state.

Various indicators suggest that the recovery from the depths of the pandemic recession is far from over, and that in many ways the economy is stagnating or shrinking. Ten million fewer Americans are now working than in February. Supplementary benefits for the unemployed expired months ago, and federally funded benefits for the long-term unemployed are expected to run out by the end of the year unless Congress takes action.

Data from credit cards and other indicators suggest that consumers have started to withdraw expenses this month as infection, hospitalization and death rates from the virus increase nationwide.

Mr Trump refused to concede the results of this month’s presidential election when he was defeated by Mr Biden. But in the weeks following the vote, he did little to promote further stimulus for the recovery or ease the toll the new wave of infections is taking to the economy.

The widespread distribution of a vaccine that would allow Americans to resume anything that approaches normal levels of travel, restaurant meals, and other types of spending for services that have been crushed by the pandemic is most likely in months. Economists continue to call for a new round of immediate congressional aid to help individuals and businesses weather the rough patch before the rebound ends.

Lawmakers are unlikely to take advantage of the lame duck session after the election to approve anything close to the $ 3.4 trillion House bill that Mr Biden defended on Monday. Majority leader Sen. Mitch McConnell of Kentucky called for a “very targeted“, and his Republican caucus backed a package that would cost around $ 500 billion.

Republicans suggested that Mr. Biden’s comments did little to influence them. “I don’t think it’s helpful,” said Senator Roy Blunt of Missouri, adding that Mr. Biden had “a lot to think about right now” beyond the scope of the back-up plan. A deal, Mr Blunt said, “is less and less likely that the most divergent views will be present.”

Business leaders in Washington have pushed the parties to compromise. “There is no advantage for Democrats or Republicans to wait until the New Year,” said Neil Bradley, executive vice president and policy director of the US Chamber of Commerce this month.

Ms Harris said the group “had an important conversation about the impact this pandemic has had on workers, especially essential workers, frontline workers, who have put their own health and the health of their families at risk. , and many who gave their own lives. to ensure our security and keep our economy running.

Mr Trumka told Mr Biden that the economy needs more investment in personal protective equipment and funding to modernize businesses and schools so they have better ventilation and can meet guidelines. social distancing. He also called for spending on more robust testing and contact tracing to contain the virus.

Mr Cornell spoke to Mr Biden about the role the retail industry plays for American consumers and said he hoped the government would provide “clear and consistent guidance on safety, regulations and deployment future of a coronavirus vaccine “.

Target noted that it had kept its stores and supply chains operating during the pandemic – and that it was staying away from politics.