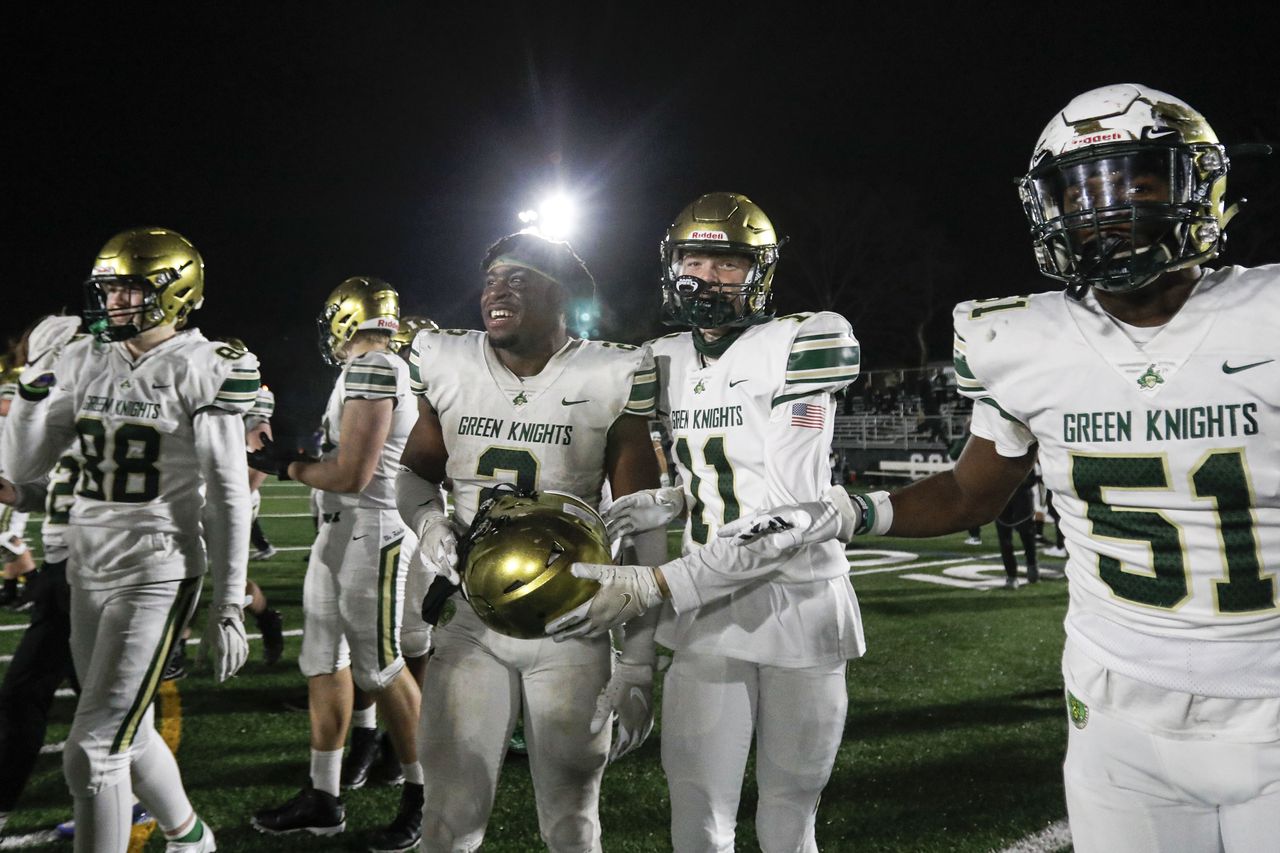 The two teams once again put everything on the line to conclude an unprecedented 2020 season, which culminated with a 20-9 victory for the Green Knights (6-2).

“We expected the best from DePaul,” said St. Joseph’s head coach Dan Marangi. “When you watch them on tape, they’re explosive. I was really nervous mostly because [No. 9] Cherokee just threw the ball all over us on Saturday. I’m just proud of this defense for not allowing a touchdown and all credit goes to our coaching staff. Getting out after just three days off like we did was exciting.

On the opposing sideline, it was the last game at the helm of Spartans head coach (3-3) John McKenna, with his huge senior class.

The 24-year-old coach (16 as head coach) will go on to become one of the most accomplished men in program history, winning five state titles from 2013 to 2019.

It wasn’t the outcome he wanted and it wasn’t an easy day, but McKenna will always be able to remember the mark he left and the people he was fortunate enough to work with.

“Today it sucks,” he said. “It was just bad. It’s hard to say goodbye. Every player on this team is special to me and I have coached with so many great coaches over the years. Now I am going to encourage the subclasses because they mean a lot to me too.

“There are so many special teams that I have coached. The 2013 team started it all for us when we beat Don Bosco Prep and Bergen Catholic in our first year in the league. Beating St. Joseph in that crazy state championship game in 2017 was also awesome. I was that young kid who took over here. I am so blessed.

McKenna and company emptied the tank under the lights on Wednesday, but it was St. Joseph who stuck with his first offense and did what he needed to do defensively to win.

Senior running back Audric Estime was bottled up for most of the first half, although he opened the touchdown score late in the second quarter and gave the Green Knights a 10-3 advantage with a 71 yard run.

For a kid who won a state championship in sophomore, racked up over 2,000 all-purpose yards this fall, scored 40 touchdowns in the past two seasons combined, and made a strong case as the top player in the world. New Jersey, you would think that Estime were struggling to find a favorite memory of his time in Montvale.

“Honestly, that was it,” the Michigan State pledge said. “Seeing the smiles on the faces of my teammates and knowing that we have finished the season the way we wanted to mean a lot to me. For Coach Marangi, winning the last game in his first year as head coach also means a lot to us. The seniors have been together for four years and all those double sessions and hot summer days together have paid off tonight. We will bond for life.

Buy these game photos: We offer reprints in a variety of sizes. Open the gallery above and select “BUY IMAGE” to purchase yours now.

Estimate’s workload again proved to be a difference factor, and St. Joseph also saw a dominating performance from one of his prized sophomores at Jimmy Mullen.

A well-known state champion wrestler and stud defensive lineman, Mullen made his biggest play on offense as he finished a 12-game record with an eight-yard scoreline on a fake play by the senior quarterback. Dorian Nowell. On the course that followed, he would walk away with a 10-yard sack to force a possible punt, handing the keys to the offensive for the knockout.

“The seniors knew what was at stake, but the sophomores and juniors wanted to send this group with a special victory,” said Marangi. “They played the tail.”

The Green Knights would return to the field, this time on a 13-game practice that ended with a 31-yard field goal from Sébastien Tasko to provide the 20-9 cushion with just over three minutes to go.

As the seniors went through their final field trials together, they waited until the clock hit zero to get their moment.

Estimated, offensive lineman Geno VanDeMark and linebacker Frankie Monte, three of the team’s most influential players and a big part of the backbone of the program, hugged their senior comrades and didn’t could not help but close my eyes.

They will all continue to play Division I, Estime and VanDeMark football together in East Lansing (MI), and they will not forget their roots.

“This match was so emotional,” said Monte, a pledge from Sainte-Croix. “It was the last time we planned a game together as a senior. We’ve been together since the first year and we love each other so much. It felt like a state championship for us.

“I wake up every morning and love coming to school because I know when I leave it’s been a great day with my boys,” VanDeMark said. “It’s a special place and I will send my son here when the time comes. There are no bad days at 40 Chestnut Ridge Rd.

Thank you for relying on us to provide journalism you can trust. Please consider supporting NJ.com with a voluntary subscription.

Ryan Patti can be reached at [email protected].