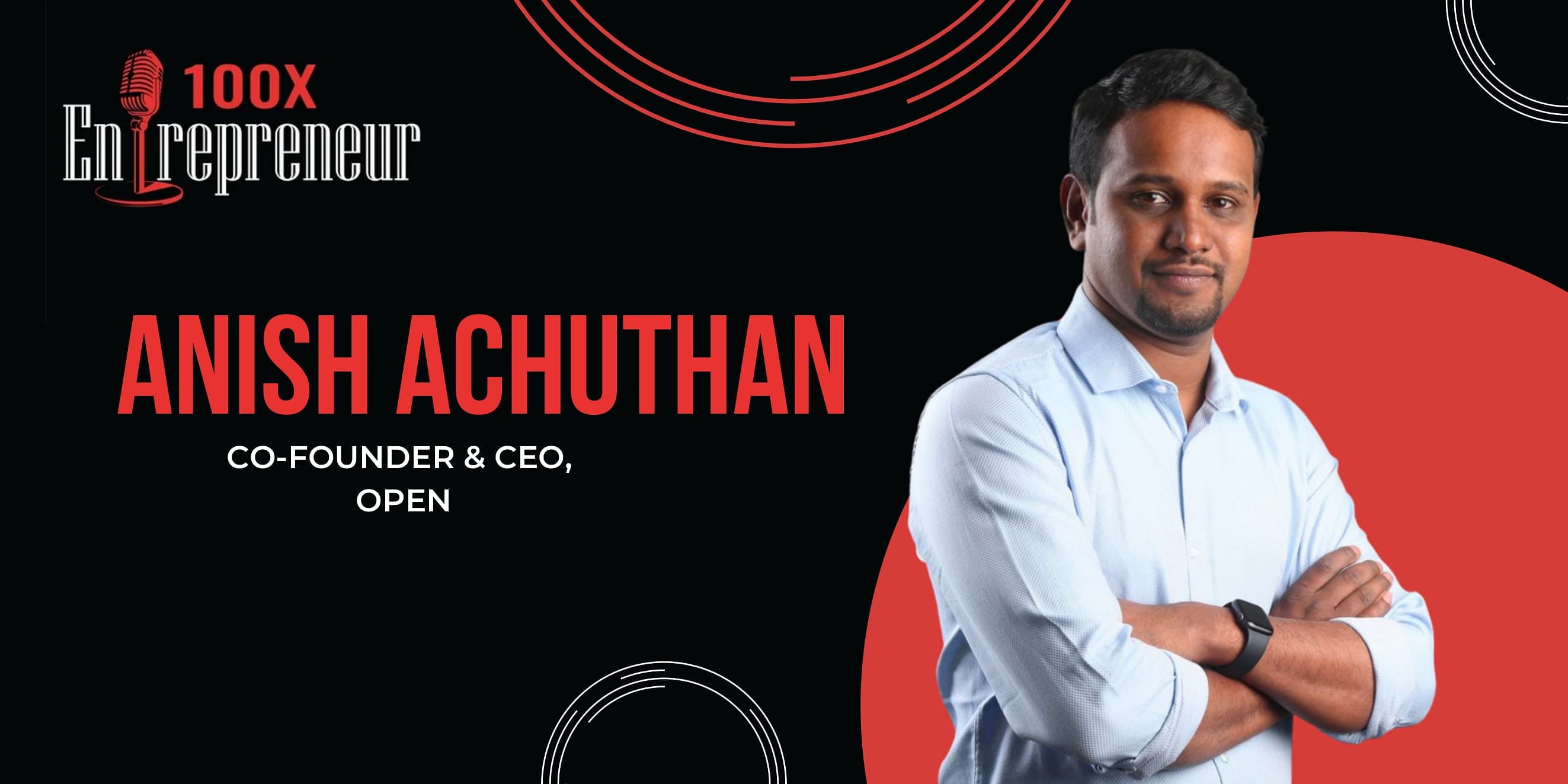 In May 2022, India’s startup ecosystem got its 100th unicorn when Bengaluru-based neobank startup Open raised $50 million in a Series D funding round from the IIFL, along with existing investors ﻿Temasek Holdings﻿, ﻿Tiger Global Management﻿ and ﻿3one4 Capitale.

In this week’s 100X Entrepreneur podcast, founder and host Siddhartha Ahluwalia explores Anish Achuthan’s journey from Perinthalmanna, a small town near Calicut, where his father was an engineer and his mother worked as a schoolteacher.

Anish, who grew up aspiring to be a journalist, first came into contact with the internet in grade 7 and went on to build websites. He remembers being deeply inspired by the story of Hotmail’s creator, Sabeer Bhatia.

“I was really inspired by the potential of the internet, especially dotcoms, because it tied into my dream of doing something in the media space,” he says.

In 2001, curiosity got the better of him and Anish ran away from home. He traveled to Trivandrum to start a value-added internet and wireless service provider iFuturz Technologies with Indiafirst.net as its horizontal portal – without completing his class 11 and 12 studies.

He made ends meet by living in temples and train stations for the first three years and built his startup with three other co-founders, all students. Indiafirst was then taken over by a media group.

From that time until it melted Open, Anish has tasted both success and failure. It launched a mobile payment platform Cashnxt, which was acquired by Latin American company Prepaid Masters, followed by an NFC-enabled payment platform, Neartivity, which did not perform well.

Anish noted that corporate banking and financial services tend to be a problem because most services exist in silos.

“Today, as an entrepreneur, I have to use several tools and all these systems do not speak to each other today. For example, if I receive a settlement from a payment gateway, I always have to check my bank account to see if that payment has been made and do a manual reconciliation,” he says.

Open’s three key offerings include an SME banking platform, an enterprise platform where companies can launch their own neobank, and Zwitch, which provides other players with the infrastructure to create fintech services.

In 2019, Open reached 100,000 SMBs on the platform, processing $2 billion in annualized transactions. This was at a time when there was a lot of talk about whether neobanks could survive in the business-to-business space, given that the cost of acquiring customers was so high.

The unicorn now has 2.3 million small businesses on its platform and processes $30 billion in transactions.

With Anish’s goal of building a global fintech company, he says more than just a neobank, the startup is building a complete financial layer on top of banking to bring all your other bank accounts together on one platform. unified form.

To budding young entrepreneurs, he says the current economic downturn could be a good opportunity.

“I always feel that sometimes the best time to start is during a recession because over the next 12-24 months many large companies will be heavily focused on revenue-generating products instead of venturing in other territories that are just gaining news,” he says.

For more, listen to the full podcast here

02:42 – From a service-oriented family in Kerala to being inspired by dotcom

19:17 – Moat against other neobanks and traditional banks

31:46 – Licenses and certifications necessary for the neobank

35:27 – Monetize their services with the freemium model