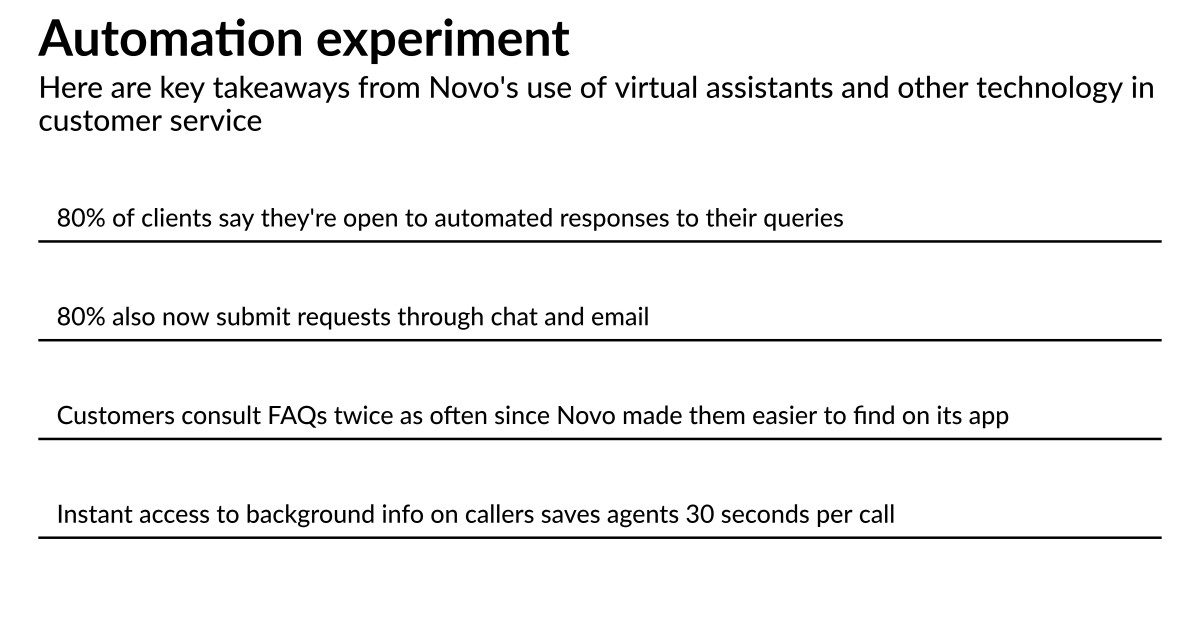 At the start of Novo, a challenger bank for small businesses, its founders personally answered all customer queries from their Gmail accounts.

The Miami-based company’s approach to customer service has changed a lot since then, out of necessity. Its customer base grew from 300 users in January 2019, while Novo was still in beta, to 5,000 users at the end of the same year. The numbers soared into the tens of thousands in 2020 and have risen to over 100,000 this year.

Brian Kale, director of customer success at Novo, began streamlining customer interactions with Zendesk software when he joined the group in January 2019. But in the early months of the pandemic, Novo stepped up efforts using Zendesk technology to automate responses to customer queries, track common concerns, and gain valuable customer information when requesting service.

In addition to lightening the burden on its staff, these tactics will help the business process requests more efficiently as its customer base grows.

Novo’s investment in customer service technology comes at a time when other fast growing neobanks struggled to meet customer demands. It also comes as competition for small business bank accounts intensifies between banks and fintechs.

Speed â€‹â€‹is everything for small business owners, said Ian Benton, senior digital banking analyst at Javelin Strategy & Research. In his own analysis of the Novo app for Javelin, he found that customer service reps respond to queries in the app quickly. In fact, Javelin’s research shows that among the top 25 retail banks in the United States, only three have built-in messaging with a human, which means Novo’s supply is scarce.

â€œIt’s light years ahead of most traditional banks, even the biggest ones,â€ Benton said. â€œThey may have chatbots, but even then they want you to call them or schedule a date for more complex matters. In-app chat is a key differentiator for the few neobanks that do.

Novo’s changes have already had an impact. In 2020, as the world began to shut down and the business moved away, Novo’s weekly ticket count jumped to around 1,800 per week for three reps to manage. (A ticket is an inbound request from a customer via phone, email, or other channel.) As Novo moved to Zendesk’s cloud-based voice system, accelerated its automated responses and deployed a custom app that gives agents More information on a customer contacting the company, the number dropped to about 1,100 tickets per week.

The company entered 2021 with five support reps and has increased that number to 30 in the past seven months.

â€œNovo quickly realized that in any industry, not just banking, the differentiator between you and your competition is the customer experience,â€ said Kale.

Some simple design changes encouraged customers to do their own research rather than submitting a ticket. For example, in the spring of 2020, Novo experimented with reversing the order in which the two help search options were presented in the mobile app. Instead of listing the option to contact support first, Novo has moved its frequently asked questions to the top of the page.

This nearly doubled the ratio of article views per ticket created, Kale said.

To answer phone calls, Novo switched from landlines to Zendesk Talk, the company’s cloud-based call center software, in days as employees dispersed across the country to continue doing their job. remote work.

The conversion to Zendesk Talk allowed Novo to manage all customer communications from one place, whether through email, phone, or chat. Novo tags calls, as well as other customer tickets, which means it tags the interaction with words or phrases that indicate the topic. These tags are aggregated weekly and monthly so the business can spot trends, study common customer needs, and justify new products.

For example, Novo introduced â€œNovo Reservesâ€ in January, which are sub-accounts that customers can use to organize funds in their master accounts. The neobank found this to be one of the most common requests from its grassroots, especially from ‘profit first’ business owners who wanted to ensure that taxes, payments and incomes were correctly balanced.

Novo also integrated Zendesk Answer Bot in Spring 2020. This is a feature that uses artificial intelligence to retrieve keywords in channels such as chat and email and provide responses to questions. simple questions. For example, a question on how to activate a debit card can be referred to as an article with instructions.

Kale estimates that 80% of customers are open to this quick interaction, which normally takes place via chat and email, and that Answer Bot helps deflect 5% of tickets that would otherwise be sent to an agent.

â€œWe see customer tickets in two ways,â€ Kale said. â€œOne is a question a customer just wants answered, and automation is great for that. “

The other way, he says, is a problem that requires human interaction. To give its agents more information about a customer when they contact, Novo has created a custom application with Zendesk’s open application programming interface. When agents receive a ticket, they display an onscreen dashboard with a business owner’s profile, including recent interactions, meaning they don’t have to switch between screens or put the customer on hold to find key details.

Kale estimates that this saves 30 seconds on each ticket. â€œLoad times, connections and mouse clicks can really add up,â€ he said. â€œThe number of mouse clicks for some tickets could run into the hundreds. “

Kristen Durham, vice president of startups at Zendesk, said Novo stands out in three ways: he maximizes core Zendesk functionality, he built his own product using Zendesk APIs, and he uses technology that will help the business to develop in the future.

This highly tactile service is especially important for Novo’s customers, who are largely one- or two-person businesses. Benton finds that Novo differentiates itself from neobank competitors through personalized service, comprehensive FAQs and quick human responses.

“While [our customers] are small businesses, many don’t recognize themselves as businesses but see themselves as a person, â€Kale said. â€œThey have consumer-level requirements and expectations. “

What is it and how it could save you money