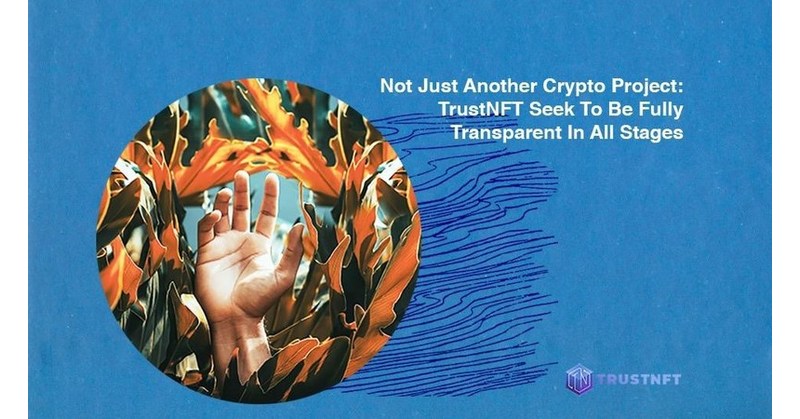 TrustNFT strives to be fully transparent at all stages

According to Mantas Mackevicius, CTO and co-founder of TrustNFT, private investors are currently welcome as time is limited to jump on the bandwagon.

He noted that early investors can benefit from the reduced price, which is a big deal compared to the price of the swap.

The aforementioned update is in line with the roadmap proposed by the project for the month of November, which implies that the project organizer strictly adhere to each goal set, which is rather impressive in an area where new projects are appearing. and disappear every month.

While private token sales are still ongoing, applicants can also join the project’s presale waiting list, which will also end on 29 november.

Members who register on the waiting list have unlimited access to the exclusive features of the project platform before it goes live. Likewise, members of the waitlist will also have access to Telegram’s VIP channels, allowing them to meet other people with similar interests.

The project organizers also plan to go public by listing the network token in an initial DEX offering (IDO) on a few exchange protocols yet to be identified by early December.

The launch of TrustNFT will be implemented in four stages

Speaking about the project roadmap, Mackevicius revealed that the project launch will be divided into four parts, the first of which is the ready aspect.

According to him, the first product line that facilitates loans is scheduled for the first quarter of 2022, after which the following launch activities will be executed.

Notably, Mackevicius explained that the central aspect of the project, the IA section, will undergo iteration as the second step in the launch process. At this point, bot training will begin, while the project framework will be tested repeatedly to ensure seamless operation, being the third and fourth step of the launch activities, respectively.

Speaking of training, Mackevicius noted that a lot of user data is required to make the AI ​​section of the project work, which is why it will arrive shortly after the product itself is launched.

“It needs more data. We need to collect data from our blockchain, our users and the public domain to successfully train our AI model.” Mackevicius said.

When asked about their biggest challenge, he was quite transparent that training and implementing AI in the project’s backbone infrastructure might require careful attention to detail.

“Of course, it’s not quite flawless. Having all the data you need to train AI is one of the main challenges. The hardest part will be deployment to real customers. ‘with one year to train and implement the functionality, all these challenges will be met “, Mantas said.

For this reason, the team has partnered with Andrius Bartminas, who has a lot of experience in this regard, having worked on at least seven blockchain projects with AI integration.

Also, since NFTs are still at a pivotal stage, there are a lot of fixes that need to be made in terms of pricing, which makes the work of AI even easier.

That said, the project is expected to be fully launched by the end of 2022, barring technical delays.

TrustNFT technology solutions combine DeFi with NFTs to add much needed utility and unleash the enormous potential of NFTs as practical financial instruments.

Will the craze for crypto startups ever produce the next tech giant?